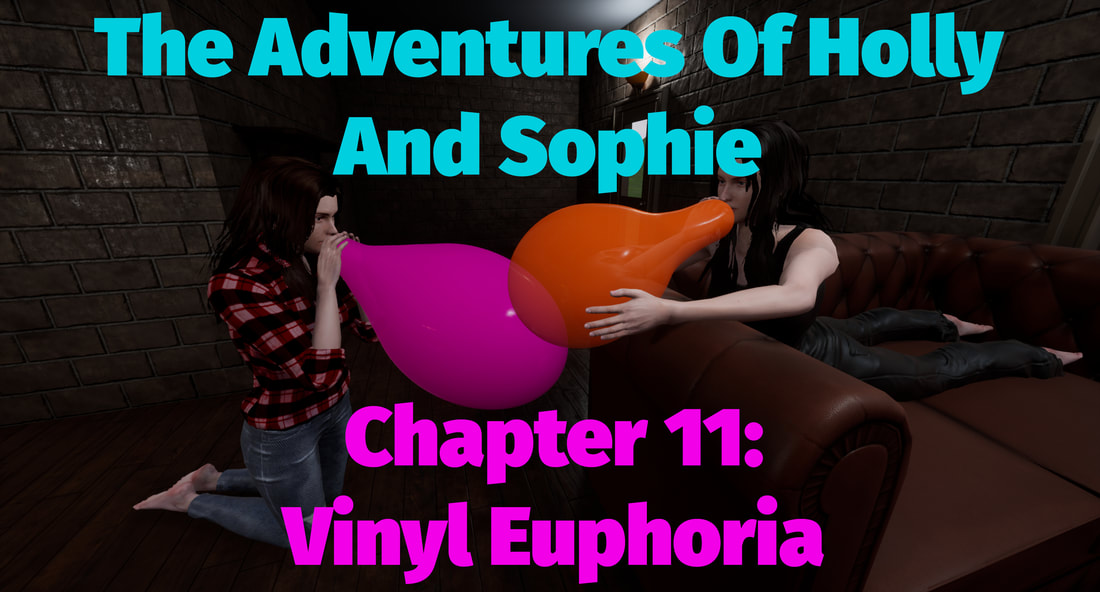 Jenny arrives at the cabin. Sophie told her to meet there at 12. She said that she had something special planned. It's been three weeks since they had all met at the cabin and Jenny did her first ever blow to pop. She had been practising ever since but it still wasn't easy for her and couldn't always manage it. But ever since that day, all her balloons were inflated until they were fully necked.

After a minute or so, Jenny wants more. She brings over the compressor.
“I hope you don't mind me popping everything Sophie, but I can't stop myself.” Jenny opens the valve on the smaller beach ball and sticks the compressor in. She then climbs on top of the large beach ball, putting the smaller underneath her. She pushes her hips against it, letting the ball support her whole body. Then she pulls the trigger on the compressor. The next few seconds turn her on more than anything else that day. She starts rising as the beach ball gets way bigger than it was designed. Jenny can feel it bulge outward. It seems to get warmer as it stretches tightly against her skin. It's impossibly hard, like it's completely solid. Jenny closes her eyes. She knows it's going to be loud, even louder than the swim ring. Any second now... Why isn't it popping? The pressure inside must be immense. Just when she's about to give up, there's a deep boom and the beach ball explodes underneath her. Jenny falls over, taking a few moments to recover. She has a closer look at the beach ball. It has a huge rip down the middle and the whole thing has been stretched thin. Jenny notices some sort of glue or resin along the seams. Sophie must have reinforced them.

Jenny is just about to go back to riding the beach ball when she sees something on the other side of the room. It's a light blue coloured, transparent plastic. She picks it up and realises it's an inflatable dolphin. Jenny has always wanted one of these but never got round to actually buying one. Nearby there's an electric pump. Jenny can't wait to blow it up by mouth, so she uses the pump until it's nearly full. She finishes it by mouth, blowing it until it's nice and firm. She carries it to the front of the sofa and is about to ride it when she notices that the flipper on the end isn't inflated. She gets the compressor and inflates it until it looks like it about to burst, then adds a little more air. She climbs on and begins to ride it hard. Then Jenny grabs one of the balloons from the sofa. She blows into it while still grinding against her inflatable. By the time the balloon is full, Jenny feels ready to orgasm.
Just a little longer... She thinks and exhales into the balloon, making the neck start to inflate. As it grows steadily towards her lips, she grinds harder against the inflatable. The neck reaches her lips, gently pushing into them. Jenny blows hard again. Suddenly the end of the neck bulges. Jenny hesitates, getting nervous but the squeaks underneath her are driving her wild. She can't stop now. Jenny lies on her front, loving the tight vinyl under her and the bulging latex around her mouth. She inhales through her nose and blows hard. The balloon just grows firmer. Jenny takes another deep breath, taking in as much air as she possibly can and forces it all into the balloon. At the same time she thrusts her hips hard into the inflatable.

The balloon explodes in her face and Jenny lets out a moan so loud it would have been heard by anyone taking a walk in the forest. The orgasm is so powerful, Jenny feels like she's about to pass out.

She lies on the inflatable whale for a few minutes, rubbing her face along the smooth vinyl. Suddenly the front door opens and Sophie walks in, a wet patch on the front of her jeans.

“Sophie...” Says Jenny, sitting up still completely naked.
“That was the hottest thing I've seen in a long time.” Sophie replies
“You were watching?” Asks Jenny, still recovering.
Sophie nods. “I saw everything through a hidden camera. I wanted to see what you would do. I was hoping you'd pop stuff, looks like you're over your fear.”

“Well, I wouldn't say that. Still scares me.”
“Really? What would you do if I gave you this?” Sophie grabs a 16-inch balloon from the sofa and starts stretching it.
Jenny starts getting nervous. She hasn't blown one of these to pop before. Sophie walks over to her and puts the balloon in Jenny's mouth. Then she picks up the dolphin. “I think you know what to do.” Sophie lies on her back on the sofa and places the inflatable on top of her.
Jenny hesitates, the balloon still in her mouth.
“What're you waiting for?” Says Sophie.
Jenny climbs on, supporting herself with her legs. She puts her arms beside Sophie and starts to slowly hump the inflatable.
“Use your whole weight, stop holding back now that I'm here! Do what you did earlier, as hard as you can.” Sophie tells her.
Jenny lifts up her legs, and starts thrusting the toy against Sophie.
“That's better. Now start blowing and don't stop!”
Jenny blows into the balloon. It has a dark blue colour. She keeps going making the colour lighter with every breath. Soon it's a transparent aqua. Jenny shuffles forward and leans over the inflatable, the balloon dangling above Sophie. Jenny keeps going past rated size, the balloon almost touching Sophie's face. It inches closer as the neck begins to fill. When it reaches Jenny's lips, she stops. “Why'd you stop?” Sophie asks.
“I'm scared. And I don't think I could hold it much longer, it's so tight!”
“Hold on.” Sophie sighs. She wriggles out from under the inflatable and walks to a drawer nearby. She searches for something then comes back. “Here we go, gimme that,” Sophie takes the balloon off Jenny and attaches a valve to it. “There, now there're no excuses. You just have to keep blowing until you hear a bang. You can't even let the air out.” Sophie goes back under the dolphin. Jenny nervously resumes inflating. It's much easier with the valve. After a few more breaths, the balloon is pushing against Sophie's face. Jenny doesn't stop and makes it tighter and tighter. How isn't she scared? Jenny thinks. She closes her eyes so the size of the balloon doesn't scare her and rides hard against Sophie, still blowing. After a while, she opens her eyes to see how big it is. The balloon is pressed against Sophie. Surely it can't take much more. After a few more hard breaths, it finally pops. Jenny screams but Sophie barely flinches. However by the look and sound of it, she's orgasmed. Jenny gets off. “That was amazing. Can I take some of those balloons home?” She asks.
“Yeah. We aren't done yet though. I have a friend that owns a pool, she's away and says we can use it. Grab some of those balloons, there're more inflatables waiting for us there. We can leave the rest for Holly next time she's here.”
“Are we leaving right away?” Asks Jenny.
“Yes, you probably want to put some clothes on.”