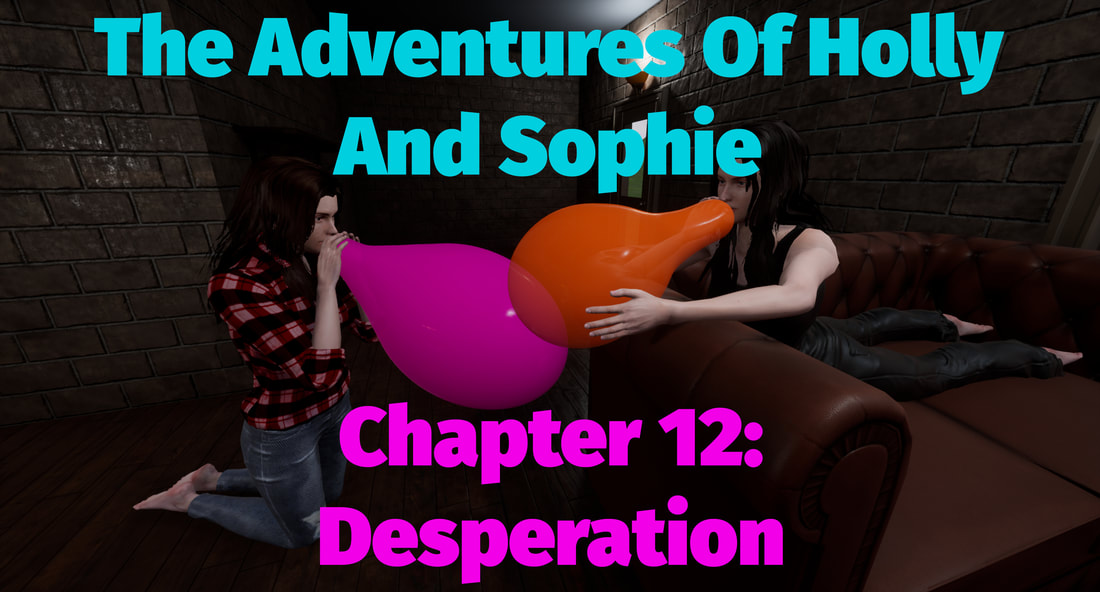 Holly drives into a lay-by in the middle of nowhere and turns off the engine. She immediately goes through the glovebox looking for something. She finally finds what she wants and pulls out a piece of red rubber.
Holly has been on a holiday with friends and hasn't touched a balloon for weeks. Eventually she couldn't take it any more, and had to get away. She made up an excuse and drove away from the town to inflate some balloons without anybody watching.

Holly puts the balloon in a cup holder and looks for more. Then she remembers she had her car cleaned and took all her balloons out. The red one was probably from the party she went to a few weeks ago. She managed to grab a few un-inflated ones for later but never got round to blowing this one up.

Oh, well, one's better than nothing. She thinks, taking the red balloon. Holly turns the interior light on as it's getting dark. She inspects the balloon, it looks like an eleven or twelve inch from the size and shape. Holly stretches it lengthways a few times, then rubs it along her nose. Inhaling the scent. Another stretch widthways and a few on the neck.

She takes a deep breath, already excited at the thought of another blow to pop. Holly bites the mouth piece and gives it another stretch. She likes a long neck. Just to be sure it'll be getting as big as possible, she grabs the body with one hand so the air can't enter and puts the other on the neck, pushing it into her lips. She inhales, closes her eyes, and blows as hard as she possibly can. It's not easy but Holly is strong from all the practice. The neck after a brief hesitation, suddenly fills with air. Holly opens her eyes and sees a big red, transparent neck. It isn't quite at her lips yet so she inhales though her nose and puts in another. It fills rapidly and pushes hard into her mouth. So hard that Holly loses grip and it shoots away from her.
She picks it back up. That should have stretched it a bit.
This time she blows normally. The balloon doesn't offer much resistance and grows quickly. She puts in another big breath, thinking whether to go slowly or not. Holly puts one hand on the back on the balloon and feels it grow bigger when she blows again. Not wanting it to be over too soon, Holly breaths in slowly and gently blows, making the breath last as long as possible. She does this again, the sound of the air entering the balloon turning her on. The balloon is still fairly soft. Holly doesn't like them soft. Well sometimes she does if she wants a gentle ride or a relaxing inflation but not when in this mood. Holly takes in all the air she can, then blows hard. The balloon gets even bigger, reaching the size it was designed for. She stops and pinches the neck closed. The balloon is tighter now and slightly transparent. Holly thinks about riding it or rubbing it against her body to make it last longer. She pushes her cheek across the smooth latex, sighing in pleasure. Suddenly she can't wait any longer and brings it back to her mouth, blowing hard. The air has nowhere else to go and finds its way into the neck. The balloon goes from a slight tear drop shape to almost lightbulb shape. It only fills halfway, from the body growing toward Holly. When she exhales again it fills completely. There's no stopping Holly now. The next forceful breath makes the end of the neck grow wider that the rest, making it hard to keep hold of. She manages to keep it in her mouth and puts in another excited breath. It gets tighter and creaks a little. She knows it's near. One more breath has to do it. It can't possibly get any bigger. She takes one last deep breath through her nose and blows as hard as she can.
BANG!
Shreds fly all over the car and Holly pants with all the excitement. After a few seconds she needs more. Holly starts searching everywhere for any left over balloons. She can't find anything but desperately wants to blow to pop something. Holly pulls out a clear plastic bag from under the passenger seat. It's something I suppose. She thinks. Holly hasn't tried blowing a bag until it pops and wonders how hard it'll be. She puts her hand around the neck of it and pushes it into her lips. She blows quickly. After a few minutes it about the size of her body and starting to become full. She slows down a bit now, hoping it won't pop straight away. Two more breaths fills it completely and another makes it tight. One more deep breath and it gets hard. Holly runs her free hand across the smooth plastic. It almost feels like an overinflated beach ball. She continues to blow, wondering how much bigger it could possibly get. Soon Holly realises it's starting to bulge. She gets even more excited and blows faster, hoping for a bang. On one side, the bag has a huge bubble forming where the plastic is stretching. It's getting thinner and thinner the more she blows. It's about as thin as cling film but still very firm. Holly doesn't slow and after a few more breaths it pops. It rips in half, the plastic wet from her breath. It had a bang to it but wasn't quite loud enough to satisfy Holly. She looks in the boot of the car and finds a black plastic bin liner. She's not sure if it'll be enough but gives it a go anyway. This time she stuffs it in her shorts for extra pleasure. Holly bends over and starts blowing. She can feel it expanding with every breath. There's not a lot of room and before long it's filled her shorts. She doesn't stop though and keeps filling it with air even though it's getting tight. With nowhere else for the air to go, the bag starts bulging down the leg hole. Knowing it won't take much more, Holly stops and enjoys the warm tight feeling of the overinflated bag. She starts putting small breaths in, hoping to orgasm before it pops. Unfortunately she has a little too much enthusiasm and pops it with another two breaths. She takes out the ripped plastic and has one final search for anything else.

After realising there's not a single thing to be inflated, Holly does a quick Google search to find nearby shops.

She eventually finds a small supermarket nearby and starts the car. Hopefully they sell balloons. She thinks.


A few minutes later, she parks the car and half walks, half runs into the shop. Holly desperately searches the isles, looking for balloons. Eventually she finds a packet of cheap ones. They're the only ones in stock. Holly goes to the self checkout, not wanting to talk to anyone in her excited state. Once she's paid, she runs back to her car.

She won't be able to drive properly in her excitement, so she parks the car at the back of the car park, under the shadow of a tree. Hoping no one will see. Holly rips the bag open, spilling the balloons over the passenger seat and grabs one. She quickly blows it up, tying it off at rated size. Then she shoves it into her shorts before grabbing another. Holly puts a breath into it. It's a solid pink colour. After only a few breaths, the neck is already at her lips. It just starts getting tight when it bursts. Holly was hoping it would put up a fight. Not yet satisfied, she takes another balloon from the pack. As she leans over, the balloon in her shorts suddenly pops. It stings a little but Holly barely notices it. She's already blowing the next one up. It's a green one this time. She meant to stop at rated size but accidentally puts a bit too much air in. The neck fills and she ties it off. Holly forces it into her shorts, making it squeak loudly. Taking another balloon, she turns around and starts grinding softly into her seat. Way too soon there's a red balloon bulging in her face. It's not long before it bursts.
How am I supposed to orgasm when they pop so fast? She thinks. Holly pushes her hips into the seat, popping the balloon.

Holly goes through most the pack. Blowing them till they burst, replacing the balloon in her shorts whenever it pops. There're two balloons left. She's lying on the back seat with a deflated balloon in her mouth. There's a blue neck poking out of her shorts. Holly blows this one slowly but it still grows quicker than she'd like. She feels an orgasm growing and almost slows her breaths to a halt. The balloon is incredibly thin and won't last long enough. Holly puts the next breath in as slow as she possibly can. The excitement builds. The feeling is so intense, she can't help but gasp into the balloon.

Holly desperately grabs the last balloon. She's past the point of no return and can't stop now. Holly blows as fast as she possibly can. At rated size, she feels the orgasm coming. Holly blows as fast as she can and feels light-headed. The neck touches her lips and Holly feels like she's about to pass out. An intense pleasure fills her body and suddenly there's a bang. Shards fly everywhere but Holly barely notices. She closes her eyes and cries out, forgetting she's in a public car park. Holly feels rather than hears the balloon popping in her shorts. One second there's pressure against her and the next it's gone.
She must have orgasmed as it burst. She pants, still lying on the back-seat. When she gets up, she checks her shorts. The inside is a mess. It's wet, with balloon shards stuck everywhere. Then Holly notices a couple looking her way. They're giggling. Probably at her.
Feeling embarrassed, she starts the car and drives back to the appointment. Only when she gets home she realises that the interior of the car is coved in colourful pieces of latex. Some so small they'll probably remain for years. Holly doesn't know how she's going to explain it to her friends tomorrow but doesn't have time to clean it now.
She goes in and has a shower before anyone can notice how hot and bothered she looks. She can worry about the car and her ruined shorts tomorrow.