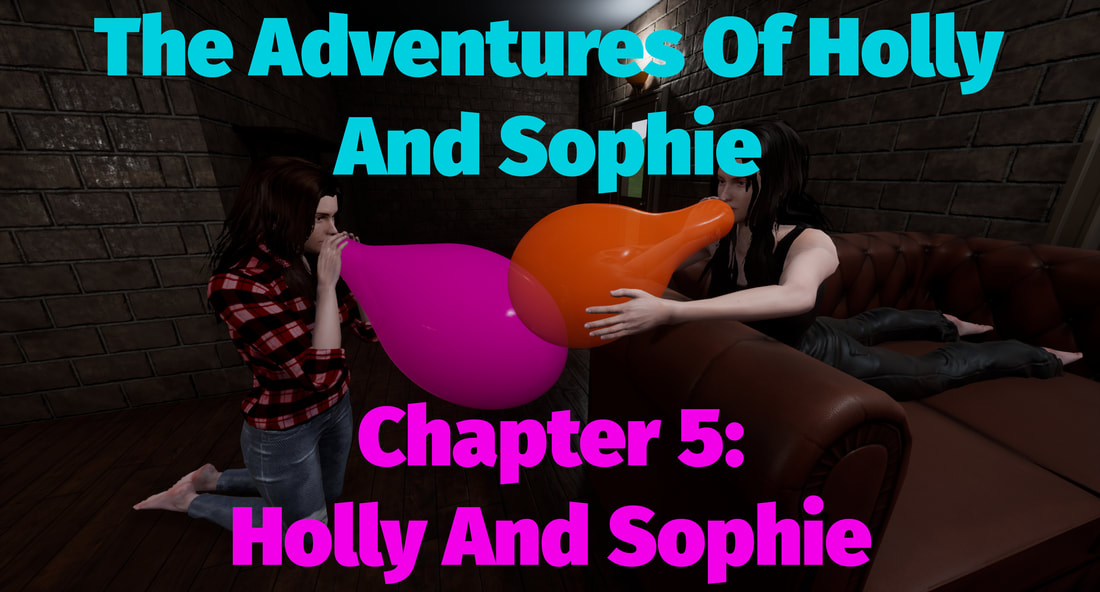 
After Holly's shower she puts on a dressing gown and goes back into the bedroom to find Sophie. When she opens the door she finds Sophie on top of a 24 inch balloon, inflating a 16 inch. There's a mix of overinflated 12 and 16 inches all over the bed and floor.
"Hey Holly. Come ride this with me." Sophie continues blowing the 16 inch, it's almost ready to pop. Holly climbs on the 24 inch with Sophie and begins softly grinding against it. Suddenly there's a loud pop. Sophie cries in delight as her balloon pops, then she walks in front of Holly. “Turn and face me, I have an idea.” Holly stops grinding and turns to face Sophie. She has a deflated red 16 inch in her hands. “I can't last much longer, wait there.” Sophie goes and grabs an electric pump. “Hope you don't mind if I cheat.” She attaches the balloon to the pump, then places it on Holly's lap. Sophie sits on it and turns on the pump. The balloon starts inflating between them, growing bigger by the second. Sophie is grinding hard against it. Holly is completely turned on, Sophie usually has this effect on her. The balloon is at full size now and Sophie pulls her in a tight embrace, pulling hard against the balloon making it squeak. The neck is full and Sophie's moans get louder. Then it pops violently, and she falls onto Holly's lap. “Damn! I was just about to climax.” Sophie goes through Holly's bag, looking for something else to pop. She pulls out a beach ball. “I suppose this'll work.” She attaches it to the pump and sits back on Holly's lap. “I'm guessing this'll get a bit harder.” Sophie turns the pump back on and starts bouncing on Holly's lap. When the beach ball is full, Holly lies down and spreads her legs, inviting Sophie to ride her. She does. Sophie thrusts the beach ball harder against her. It's extremely tight and Holly sees a wet patch on Sophie's shorts. She cries loudly and pushes the inflatable with all her strength against Holly, making it squeak then pop loudly. She falls onto Holly. “That felt so good.” She pants. Then she touches Holly's pussy. “You're not done yet? That's no good, here let me help you.” Sophie gets the last beach ball and puts it inside Holly's dressing gown, right next to her throbbing pussy. She switches the pump on. “There that should do it. I'm gonna go get changed, have fun!” Sophie leaves Holly with the expanding beach ball. Holly moans and gets onto her front, humping the inflatable as it gets tighter. She doesn't know how close it is to popping buts it's pushing extremely hard against her. She gives a cry of pleasure as it starts bulging. If it gets and tighter it's gonna hurt she thinks. It still goes on. Holly can't hold it back any longer. She screams in pleasure and pain as the beach ball gets impossibly tight. Sophie runs in. “You alright? Shit it's huge.” She jumps onto the bed and sits on the beach ball. Hard. Holly screams again. The pressure is intense. Then it finally blows and Holly let's out a sigh of relief.
“You alright.” Sophie asks.
“Yeah, it got a little too tight for comfort though. Thought it would never pop.”
“Sorry I should have been watching, I could've turned it off if it got too tight.”
“It's fine, it felt amazing anyway. Oh, yeah, I may have ruined your dressing gown.” She laughs. Sophie hugs her, and they lie together and eventually fall asleep.