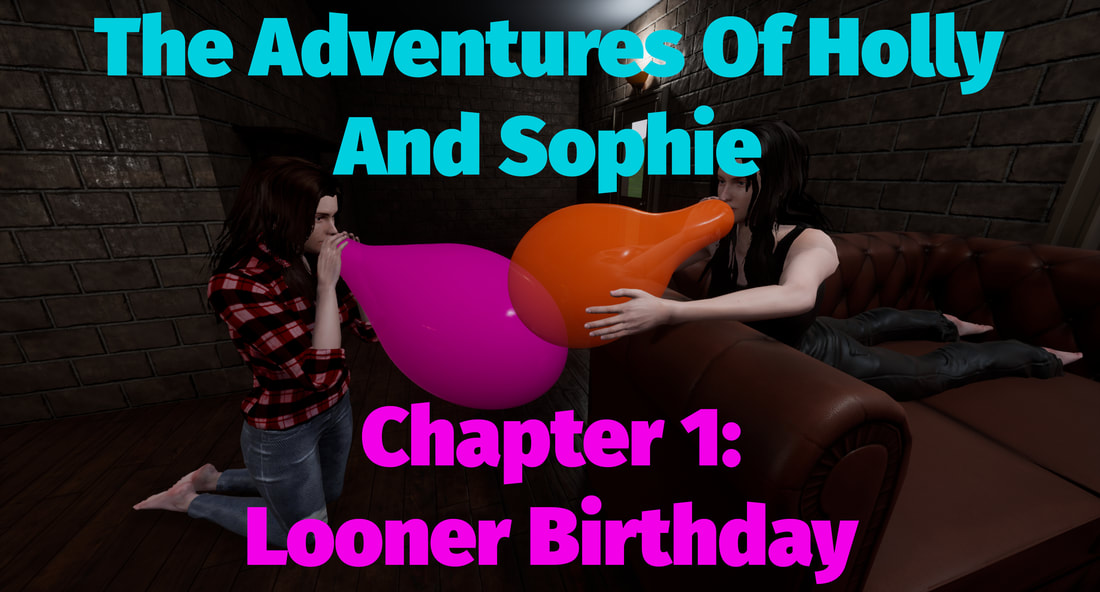 Dan sits on his bed waiting for his girlfriend Holly to come round. It's his birthday, and she said that she had something special planned. He hopes it has something to do with balloons, she knows about his fetish, and they had inflated some 12 inch balloons together once. Suddenly there is a knock at the door. Dan jumps off his bed and runs to open it. She is standing there, as beautiful as ever.
“Happy birthday!” She says, giving him a long kiss. “I ordered something for you, I hope you're up for a bit of fun.”
“Can't wait.” Replies Dan simply.
Holly pulls a backpack off and walks into the living room. Dan closes the door and follows her.
“Do you want a drink or anything?” He asks.
“No, I want to get right to it. Go wait for me in the bedroom.”
Dan feels nervous excitement as he wonders what she has planned, he walks to his bed taking off his jumper.

Holly opens her backpack, taking something out, Dan couldn't see what.
“Go sit in the edge of the bed and take off your belt.”
Dan does as he is told. Holly walks in front of him, and crouches  down. In her hand is a limp red balloon.
“Is that...?” He begins.
“Yep, it's a 16 inch. Want to know what I'm gonna do with it?”
Dan opens his mouth to speak.
“Ssh, just watch me.” She begins stretching the balloon, moving closer to Dan. She sits on his lap and gives him a long kiss. “You ready? She whispers. Before waiting for an answer she pulls open Dan's pants and places the balloon inside so only the neck is showing.
Dan can't believe what he is seeing. Is she going to inflate a balloon in his pants?
Holly leans in, takes a breath, and blows into the balloon. It starts swelling, without hesitating she blows another two, the balloon getting bigger and pushing against his cock. She pinches the neck and looks at Dan. “Feel good?” She asks
“Don't stop!” He replies. Dan has a raging boner by now.
She giggles and leans in to blow it bigger. Dan moans in pleasure as the balloons starts getting tighter. This excites Holly, and she keeps blowing harder and harder, the balloon squeaking as it rubs against Dan. Another deep breath from Holly and in goes another breath. The balloon is getting huge, it can barely fit. She forces one more breath in and the neck starts inflating.
Holly hesitates for a moment.
“Keep going!” Dan encourages her.
She does, forcing the air in, even though it's getting hard to blow.
“Oh my god it's so tight” she exclaims pinching the neck closed.
“It feels so good!” Cries Dan “make it bigger.”
Holly struggles to push a few more breaths in, the neck starting to push against her lips.
“It's gonna pop!” Says Dan.
“You or the balloon?” She asks.
“Both!”
“I better hurry up and pop it then. I'm not done with you yet.” She blows hard into the balloon, the neck pushing against her face.
“One more!” Cries Dan. Usually he is too scared to pop balloons but now he was too turned on to care.
Holly tries to force one more breath in, the balloon squeaks in protest, but she keeps going.

The balloon explodes into tiny fragments in Dan's pants, making them both jump.

“That was amazing.” Pants Dan
Holly climbs on top of him and kisses him hard.
After a while, she gets off him. “I'm not finished yet.” She breathes. Holly walks back to her bag.
“What's she gonna do now?” Dan wonders.
Holly comes back with a sleeping bag and places it on the bed.
“Take your clothes off and get in. I would leave your underwear on though the friction might hurt.”
Dan doesn't question her and does what she asked.
Holly goes back to her bag and takes out an electric pump and what looks to Dan to be a clear 24-inch balloon. She plugs the pump into the wall and attaches a tube to the pump.
Dan has an idea of what she is gonna do, he gets hard just thinking about it.
Holly puts the balloon on the end of the tube and takes her own clothes off. She gives the balloon to Dan.
“Hold this.” Then she switches the pump on and rushes to get in the sleeping bag with Dan. They lay side by side looking at each other as the balloon starts inflating between them.
“Happy birthday Dan” she says, then starts kissing him.
Soon the balloon has reached a large size, pushing them apart.
“It's gonna get really tight, I hope you're ready for this Dan.” She puts her arms around him and starts grinding against the balloon as it pushes against them. Dan pulls himself closer to her, the balloon is bulging around them, getting tighter by the second.
“You like this?” Whispers Holly
“Yeah, it feels so good.” He moans
“See if you can cum before it pops. It can't be long it's getting so tight.”
The balloon keeps getting bigger and bigger, it can't reach its full size because of the sleeping bag so it just gets tighter. Soon the neck starts inflating.
“When's it gonna pop? I can't last much longer.” Cries Dan
“AARGH! I didn't think it'd get this tight!” She exclaims.
Dan can't hold it back any longer and explodes all over the balloon.
Holly grabs the balloon, pulling it in closer to her.
“Yes!” She screams, grinding harder against it.

BANG! The balloon finally pops with a deafening bang. They fall on to each other, both panting and wet.

It was the best birthday of Dan's life.

It's getting late, so they get into bed together, leaving the balloons on the bed.
“So since when did you get so into balloons?” Asks Dan.
“Well, I was going to buy you some balloons for your birthday, more of a joke present than anything. I ordered a few bags of good quality balloons online the other week. A few days ago I was shopping and saw there was camping equipment on sale. I thought we could go camping together sometime, so I bought us a tent and some sleeping bags. When I got home, I saw the balloons siting on the table. I looked at the sleeping bag and had an idea. I wondered what it'd feel like in the sleeping bag with a huge balloon pressed against me. I wanted ideas to surprise you with on your birthday, so I decided to try it out. I got in and grabbed a 24 inch and blew it up. After it started getting tight I got a little scared, so I attached it to the electric pump. My idea was that I'd force myself to pop it. Once the balloon got tight, I couldn't move to turn the pump off. Eventually it popped, it felt amazing. That evening I decided to try out the bag of 12 inch balloons, I only meant to make sure they were a good quality but before I know it I was over inflating them, seeing how big they could get. Soon I was riding and popping them. I even managed to blow one until it popped. I realised I was getting turned on and soon had popped the whole packet.”

“I'm glad you enjoyed them. Never thought you'd get into it.” Dan kisses her and soon they fall asleep.

Dan wakes to the sound of air rushing into a balloon. He opens his eyes. Holly is sitting next to him inflating a 16 inch. It's huge the neck against her lips. She grabs an inflated balloon from the day before and starts riding it against him. After two more breaths, it bursts. She giggles and starts riding harder, the neck shooting out every time she bounces. Suddenly it pops and she falls on top of him.
“Wow, what a way to wake up.” Dan says.
“You fancy going camping this weekend?” Holly asks.
“Yeah sounds fun. Will you be bringing balloons?”
“Of course.”
“Can't wait.”