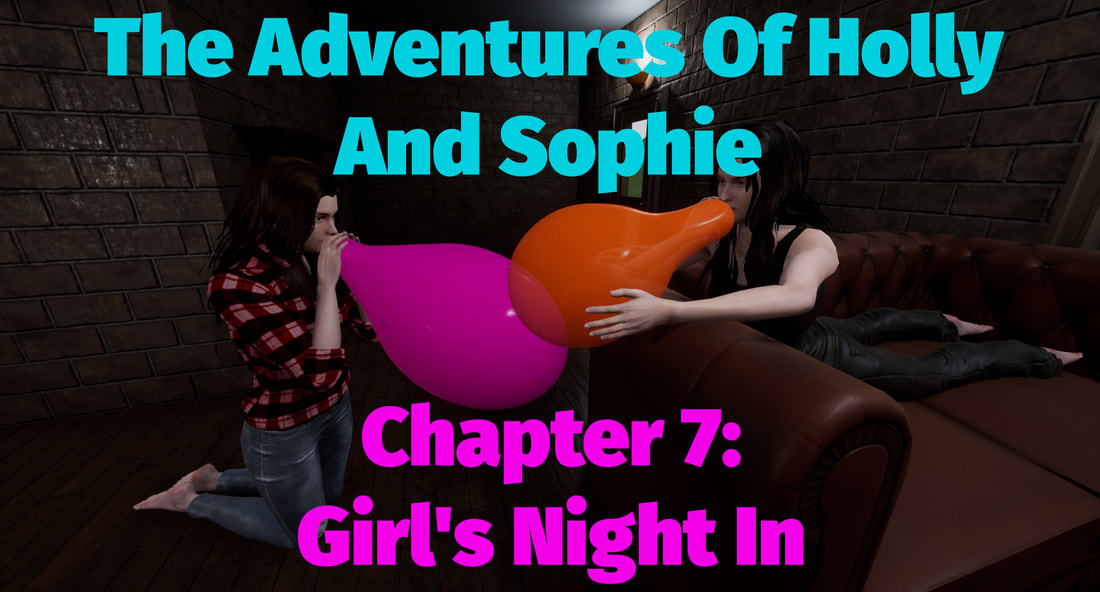 Holly's phone rings. It's been 3 days since she was at Sophie's. Holly answers. “Hi Sophie!”
“Hi, are you busy?” Sophie asks.
“Dan's coming back in a few hours, but I'm free now.”
“Good, I've bought loads of balloons and have some ideas.”
“Great! Want to come round? I would come to yours but I'm waiting in case Dan is early.”
“Yeah that's fine, I'll come now.”

15 minutes later Sophie knocks at her door. Holly lets her in.
“Holly, I've thought of a really good game. I'll tell you what it is in a minute. Where do you want to play?”
“Let's start in the bedroom. Want a drink or anything or are you ready to play now?”
“Now, I can't wait any longer.” They walk to Holly's bedroom. Sophie throws a bag on the bed and takes out a packet of 12 inch balloons. “Here's what we're gonna do; we both inflate balloons until they pop then move up a size. First person to orgasm wins.”
“Sounds fun.” Says Holly taking a red balloon from the packet.
“Wait there's a catch.” Says Sophie. “You can't touch yourself, not even with the balloon.”
“Wow, this is gonna be hard.”
“We'll have to get really horny. After this game, we'll have another race. First person to orgasm 3 times in a row.”
“Sounds fun, let's start now, I'm getting turned on thinking about it.”
“Okay, we start with 12-inch, then 14, 16, 18 then finally 24. Let's go!” Sophie takes her own balloon and sits on the bed. Holly sits facing her and starts slowly inflating. Sophie blows faster and before long the neck is completely full. She waits for Holly to catch up. Holly keeps putting in breath after breath, the neck getting longer with every second. Sophie can't wait any more and blows hard making her balloon pop. This excites Holly, and she blows faster not slowing until BANG!
“14 inch next. Blow quickly, I don't know if I'll make it till the 24 inch.” Says Sophie throwing a blue balloon to Holly. She takes it and blows as hard and fast as she can. Sophie takes her own and tries to match Holly's speed. Holly's balloon has a huge neck, she can barely keep it in her mouth. Suddenly it explodes, sending latex shards everywhere. She watches Sophie struggle with her balloon, it takes all her self-control to resist touching herself. Sophie's balloon bursts and she sighs in pleasure. “Holly I think we should skip to the 24 inch. I'm gonna cum soon.”
“Yeah same here, let's inflate it together.”

“Lie down and spread your legs.” Holly instructs. Sophie lies on her back and opens her legs waiting for Holly. Holly takes a 14-inch red balloon and starts stretching slowly.
“Holly please hurry up, I'm so horny!” Holly giggles then puts the balloon against her lips and blows softly. The balloon starts to swell. She slowly breaths into the balloon, making it a little bigger. Sophie starts fidgeting. Holly knows how turned on she is but wants to tease her a little first. She gently rubs the balloon against Sophie's body, making her moan softly. After a few seconds Holly puts it back to her lips but doesn't blow yet. She teases Sophie by biting the lip of the balloon and stretching it with her teeth. Then she starts inflating slowly until the balloon is about 12 inches. Then she pinches the neck closed and places the balloon on Sophie's wet jeans. Holly slowly lowers herself onto it and starts to bounce.
“Oh Holly, don't stop!” Sophie moans in pleasure. Holly bounces harder, putting more weight on the balloon. It squeaks as it rubs against her soaked jeans. She keeps bouncing, faster and faster. Sophie lets out a loud moan. Holly quickly gets off the balloon and puts it back to her lips.
“Holly why?” Sophie complains.
“Just wait, I'm gonna make you squirt harder than you've ever squirted before.” Holly puts the balloon back to her lips and looks at Sophie. She moves her hand, about to touch herself. Holly stops her by grabbing her hand. “Not yet, I'm watching you.”
“But you're making me so horny.” Sophie complains.
Holly ignores her and goes back to inflating the balloon.

Before long, it's reached its rated size. Holly stops blowing and pinches the neck closed. She holds it up to the window, admiring the perfect red colour. It's a crystal colour and transparent enough that Holly can see Sophie through it. She rubs the balloon, making it squeak loudly. “Feel how tight it's getting.” Says Holly, grabbing Sophie's hand and placing it on the balloon. “Hold it for me while I make it bigger.” Whispers Holly in a sexy voice. Sophie holds the balloon with both hands and Holly puts in another breath. The balloon starts to grow a neck as Holly blows more air in. Once it's halfway full, Holly stops. “Would you like to make it even bigger?” Asks Holly sweetly. Sophie nods. “Here you go.” Holly holds the balloon against Sophie's lips. She bites it without hesitation and starts blowing hard and fast.
“Sophie you're getting a bit carried away, slow down before you pop it.” Sophie doesn't listen and keeps blowing until the neck is touching her lips.
“I think that's enough.” Holly says and takes the balloon off Sophie.
“Aw, Holly. Please let me pop it.” Sophie tries to take the balloon back. Holly pushes her back on the bed and starts blowing slowly to tease Sophie. The neck is pushing firmly against Holly's lips but, she doesn't stop. It can't get any longer so it starts getting fatter at the end. Holly puts it a long slow breath, making the neck bulge around her mouth.
“It's getting so big, let me finish it!” Sophie begs. Holly blows again.
“Please?” Sophie looks her in the eye.
“Oh go on then.” Holly gives the balloon back to Sophie to finish off. She eagerly takes it and starts blowing roughly.
After two big breaths the balloon explodes violently in Sophie's face, shredding into hundreds in pieces. She moans and pulls Holly in, kissing her hard. After a few seconds, she pulls away. “Finish me off.” She whispers into Holly's ear. “Okay, take everything off.”
Sophie takes off her jeans as fast as she can. Holly finds a pink 12-inch balloon, knowing Sophie won't last long. She's lying on her back with her legs wide open, waiting for Holly. Holly puts the balloon against her lips and blows. Then she starts to gently stroke Sophie's clit.
“Come on Holly, harder than that!” She moans.
“Wait.” Holly goes back to blowing up the balloon as fast as she can.
“Harder!” Sophie shouts. Holly strokes a little harder but doesn't want Sophie to finish yet.
“Holly, you can be rougher than that.” Sophie complains.
“Just wait, I know what I'm doing.” Holly puts in another lungful, the balloon is full size and starting to develop a neck. Knowing she can make it pop soon, Holly puts her hand deeper into Sophie's pussy and fingers her hard, making her moan. Then she blows as fast as she possibly can, making the neck grow with incredible speed. The neck is pushing into Holly's lips, and she fingers Sophie even harder. Her moans increase in volume. She's about to orgasm. Holly inhales deeply and blows hard. She feels pressure on her lips, then there's a bang. Sophie's body tenses up just as the bedroom door opens. Holly quickly removes her hand but it's too late. Sophie squirts all over her and the bed.
“What's going on here then?” It's Dan, standing in the doorway. He looks shocked but curious.
Holly spins around. “Oh hi Dan... We were just, um...playing...”
Dan looks at Holly, soaking wet, then sees the balloons. He knows exactly what is going on. “You were playing without me? I'm guessing this is Sophie.”
“Yeah...” Says Holly, not knowing what to say.
“I'll go have a shower and leave you two to it.” Sophie gets up and looks at Holly. “Shit, sorry Holly. Didn't mean to get you wet, I promise.”
“It's the bed I'm worried about. Think I'll need a new mattress.” Laughs Holly.
“Well it's your fault for making me so horny.” Sophie gives Holly a quick kiss then goes into the bathroom.
Dan turns to Holly. “I didn't know you two were that close.”
“Sorry Dan, Sophie's special to me. But I still love you, I can have you both, right?”
“Yeah I suppose, nothing wrong with that. You better make it up to me though.” Dan grabs a balloon and gives it to Holly. “You can start by blowing that till it pops.”
“Thanks Dan. Knew you would understand. For the rest of the evening I'll do whatever you want.”
“Great, I have a few ideas. Now start blowing...”