Dan likes to pop smaller balloons (9-12 inch). He can blow them until they pop without too much fear. He also likes large balloons but usually gets scared of them popping. Holly has helped him overcome his fears but he still gets nervous when she dose blow to pops with anything larger than 16 inch. Despite this fear he loves it when Holly forces him to pop large balloons. His favourite being the time she pumped a 24 inch in a sleeping bag until it burst.

Holly loves blowing balloons till they pop. Sophie introduced her to the fetish, and she grow to like it more and more. Holly likes to see how big she can get the necks and always blows them to the absolute maximum. She usually gets carried away and ends up popping them. Holly likes blowing 12 and 14 inch best because they don't take long to inflate and always get long necks. Holly also loves bigger balloons but because they are more expensive and she usually ends up putting a bit too much air in them, causing them to pop, she saves them for a special treat. Holly loves her secret balloon sessions with Sophie, it always makes her more horny than she would like to admit. This was the main reason she took so long to tell Dan about it.

Sophie likes her balloons tight and their pops loud. She loves to blow them until they are pushing tightly against her lips, and seeing how much air it'll take before they explode. She also likes to sit pop them. Sophie's favourite thing to do is grinding against a large, tight balloon while blowing another to pop. She loves it when Holly inflates a balloon up against her, especially inside her clothes. She used to like tying up Holly and watching the fear in her eyes as she blew up a balloon till it popped. Sophie wanted Holly to get over the fear so they practiced blowing together until she was able to do her first blow to pop. At first Holly used to beg her to stop when the neck started inflating, Sophie would keep going until it was bulging around her lips before stopping. She didn't want to scare her too much but always got carried away. One day Holly asked Sophie to tie her up and do a blow to pop and to not stop even if she begged. This was how she helped Holly overcome her fear.

Jenny likes to inflate and ride large balloons, but she is very fearful of them popping. She also likes balloon stuffing and blowing up balloons in her clothes, usually very large balloons such as 36 inch. That way she can blow them up big without risking a pop. Jenny would love to able to inflate a 24 inch in her shirt until it gets incredibly tight but is too scared. She found Sophie online and asked her to help with her fear. Jenny said she wants to be able to blow a balloon until it's fully necked and maybe blow to pop a smaller balloon eventually.
Since the advents at the cabin, she always overinflates her balloons and sometimes gets carried away enough to pop a few. Occasionally gets friends to pop for her.

Name: Aria
Age: 20
Height: 5'2"
Build: lean with surprising strength
Hair and eyes: red-brown hair with large blue eyes
Orientation: bi, prefers girls but will flirt with boys as well
Personality: outgoing but can pretend to be shy, very flirty, bold or submissive, depending on who she's trying to subdue
Likes: teasing people in a flirty way, turning everyone on, especially in a public place and getting girls off, even better if they have a boyfriend
Favourite balloon: whatever the person she's inflating it for's favourite
Fear levels: medium, she's fine with party balloons but sometimes acts more scared than she is, especially with large balloons.

Aria doesn't actually have the fetish herself but loves seeing the effect it has on Holly and Sophie. She also loves the challenge of a blow to pop. Has crush on Holly. 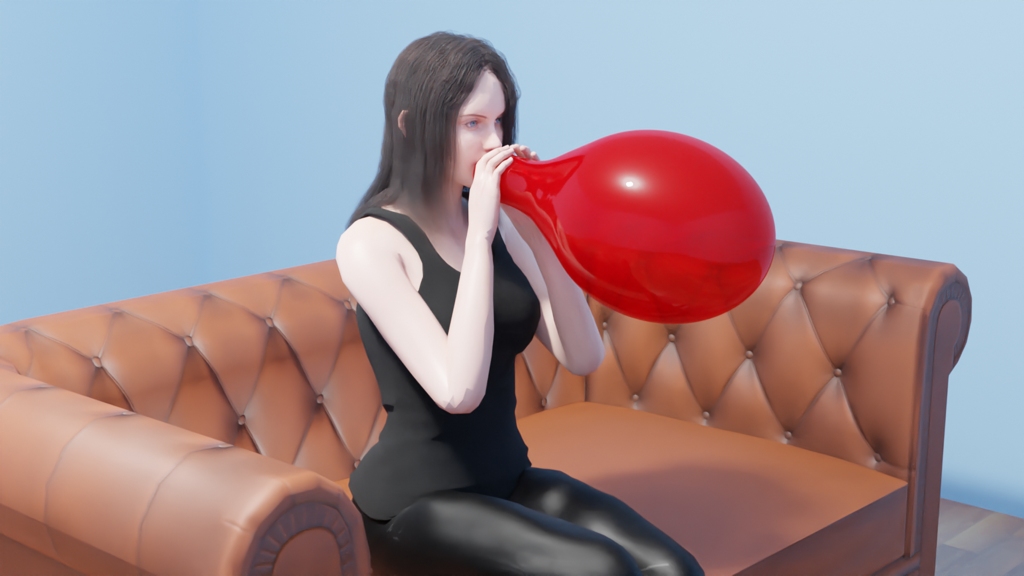 A render of Holly - made by me

Kira and Freya from the story “Kira”
Powered by