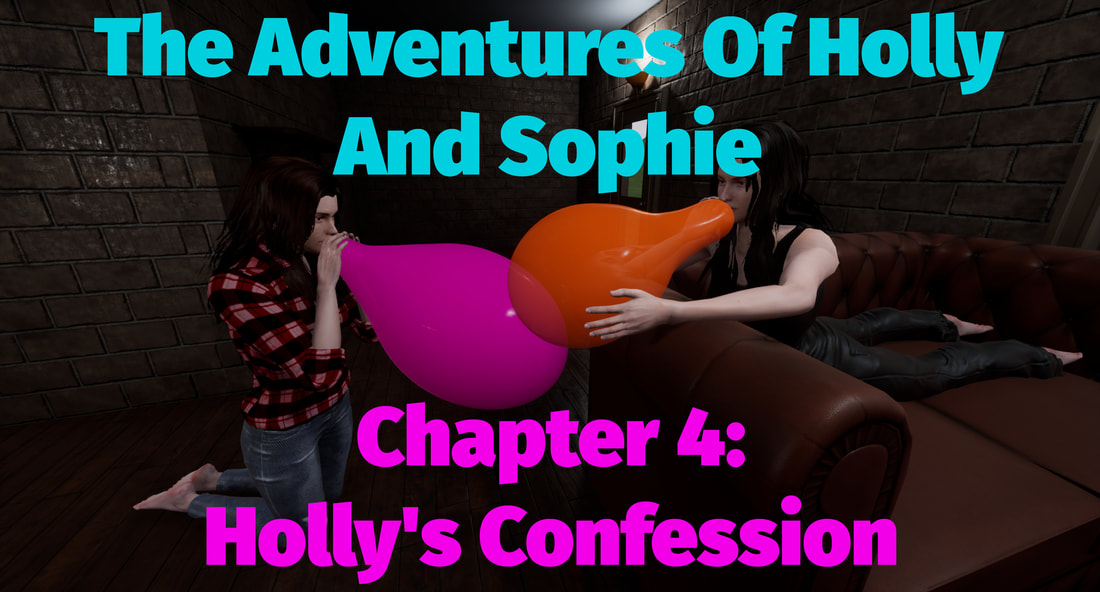 Dan and Holly finish clearing up the mess from the day before. Holly finds the 24-inch balloon that she was playing with yesterday. It looks stretched but should still inflate okay. She puts it in her pocket for later. They pack up the tent together and load up the car. Holly gets in the drivers seat when Dan's phone rings.
“It's work, I better answer it.” He says, getting out the car. Holly takes the 24 inch out her pocket. Dan has his back to her and doesn't see her put the balloon to her lips. She inhales deeply and starts inflating. It instantly turns her on. There won't be enough room in the car to inflate it probably but Holly doesn't care, she doesn't slow down until it's bulging around the steering wheel and pushing against her. Suddenly the door opens. Dan gets in. “That was my boss. They want me to work away for a few weeks...” He suddenly sees the balloon.
“Start blowing.” Holly passes him the balloon. Dan grabs it, forgetting all about the phone call and blows hard. Holly takes her jeans off and opens her legs, facing Dan. He pushes the balloon against her and continues to blow. Holly moans softly and puts her arms around the balloon. It can barely fit in the car. Dan stops blowing and is about to tie it.
“Wait, we're not done yet. Give it here, it can get way bigger.” Holly takes the balloon from him and starts inflating immediately. It is getting huge because the previous inflation stretched it. The neck starts getting longer with every breath.
“Holly I don't think it can take much more.” He says nervously.
“It's fine, there's loads of room left." Then she speeds up, trying to scare him. She didn't want it to pop yet, just get it as big as possible.
"When are you going to stop? You're not gonna pop it are you?"
"What, you scared?" She teases him.
"A little."
Holly keeps blowing, knowing it could get a bit bigger.
"Holly please..." Dan begs.
"Just a little more, then I'll stop. I promise." She unloads 5 more breaths. The balloon is pushing against them. "I'll stop now if you want. Still think it can get a bit bigger though..."
"If it turns you on, you can make it bigger. Just try not to pop it." He puts his fingers in his ears, in case it pops.
“Yes!” She excitedly puts another 10 breaths in. Holly is extremely horny now but can see Dan is terrified, so she stops and ties it. Then she begins grinding against it, pushing the balloon hard against Dan. She knows if he is turned on enough, he'll want it to pop.
Harder and harder she grinds, the balloon squeaking as it rubs against them. Holly starts moaning, first softly then more loudly and finally into a cry of joy as she orgasms. Dan is also grinding hard. Suddenly there's an extremely loud boom, and they both jump. The wet latex flies all over the car. They both pant for a few minutes before Dan finally speaks.
“Great, now I have to change.”
“Sorry, my fault should've given you some warning.” She giggles


After they changed clothes, they get back in the car.
“Holly I've been wondering... Seeing you just now with that balloon, you looked really horny. You seem to like balloons as much as I do. I'm surprised you took to it so fast.”
“Yeah, about that... There's something I've been meaning to tell you.” She hesitates.
“Go on.”
“I better start from the beginning. Before I met you, I had a good friend who has a balloon fetish like you. We used to share everything with each other. One day she told me about her thing with balloons. At first, I thought it sounded a bit strange, but she got some out and started playing with them. She blew a few up and started bouncing on them, then asked me to join in. I liked the feel of them, but they didn't turn me on. She then started over inflating them. It used to terrify me, once she started there was nothing I could do. She would keep blowing until it popped. At first, I was scared but after a while I got used to it and even enjoyed the adrenaline. After a few weeks, I started to get a little horny when she blew the balloons to the max. She could see this and told me to take off my clothes and ride on. I felt a bit embarrassed at first, but then started to enjoy myself. She then gave me a packet to take home. Soon I was blowing them till the necks came out, then I tied them and started riding till I orgasmed. We met at least once a week to play together. I was still scared of blow to pops though.”
“How come you never told me?” Asks Dan.
“I meant to but there was never a good time. Anyway I'm not finished. You remember how we met, at that hotel? I was watching you, you was staring at a young woman inflating balloon on a helium tank. I saw the bulge in your pants and wondered if you also had the fetish. I decided to talk with you and see how it went from there. I was going to wait to see if you would tell me about your fetish. I was so glad when you first told me but I didn't want you to know about me and Sophie. That was our secret. So I kept quiet. I'm sorry I should have told you sooner.”

“Wow...” Says Dan after a few moments of stunned silence. “I never would have guessed. Do you still see her?” He asks.
“I still talk to her, we haven't met to play since I met you. I'm sure she would love to meet you.”
“I have to go away for a few weeks to work. Maybe you two could meet up again while I'm away. Have a bit of fun with your balloons perhaps.”
“Really! You wouldn't mind?”
“Not at all, as long as you're having fun.”
Holly gives Dan a long kiss then starts the car. “When are you going?”
“Tomorrow.”
“I'll give her a ring later then. Maybe we could meet up when you get back.”
“That'll be great.”