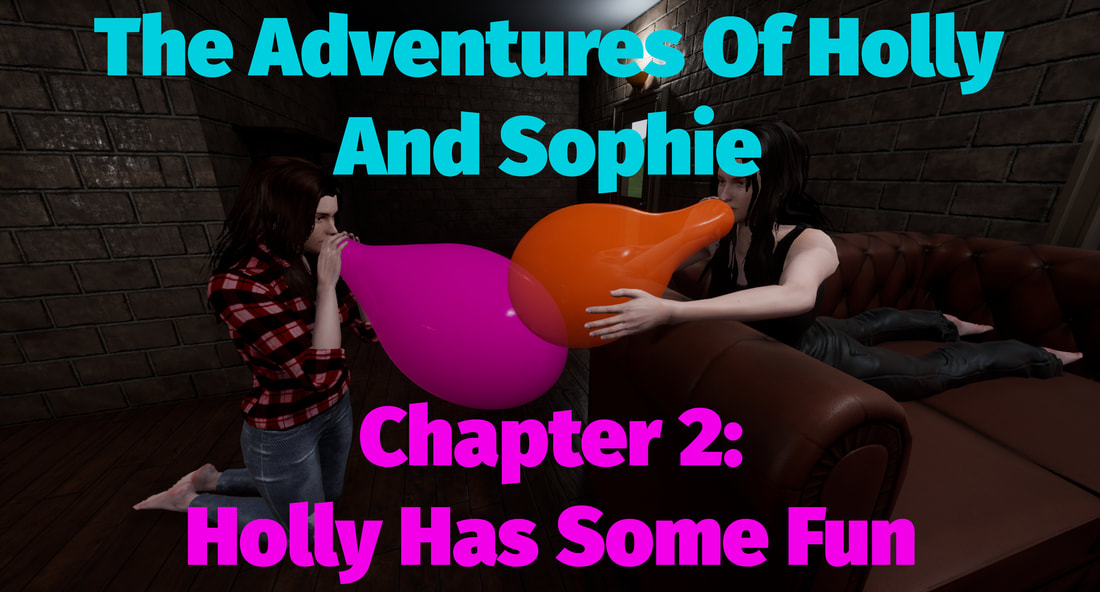 “I'll see you Saturday, then.” Holly calls to Dan as she leaves his house.
“Yeah, look forward to it.” He replies, getting dressed.
“Wait Dan...” Holly has an idea. “Could I take some of your balloons?”
“Sure, you bought them for me anyway. You fancy some fun at home do you?”
She laughs. “I want to practice for the weekend, might even buy some more online.” She walks over to the bag of balloons she bought for Dan and pulls out a handful of 12 inch balloons and a few 16 inches. She stuffs them in her pocket. “Bye!” She calls as she walks out the door. When she gets home, Holly checks her watch. It's almost 11 am.
“I suppose I got to get on with some work.” She sighs, turning on her computer and throwing the balloons on the table.

Holly works for a digital design company, creating logos and websites for big companies. She pulls out her tablet and gets to work.

Two hours later she goes to make herself lunch and watch some TV. After she's eaten, Holly glances at the balloons sitting on the table. She thinks back to last night with Dan, and starts to get a little horny. Before she knows it, she is grabbing the balloons and running to her room. She closes the curtains and shuts her door. Holly puts the balloons on her bed, picks a clear coloured one and puts it to her mouth. Then she slowly exhales, the balloon starts to swell, she blows in another breath. Holly loves the sound of the air entering the balloon and starts blowing faster, each breath making her more excited. She slips her hand into her underwear and blows in another breath. The balloon has reached full size, but she's too excited to stop. Stroking her pussy she exhales hard, the neck of the balloon starting to fill. This turns her on even more, and she takes off her pants, still inflating the balloon. He strokes harder as the neck touches her lips, Holly bites the mouthpiece and inhales deeply through her nose, she's shaking from the excitement and the anticipation of the pop. The balloon can hardly take any more air, but she manages to force in another breath anyway. One hand on the neck and one on her pussy, she fights to force more air into the overinflated balloon, it's completely transparent now. She's just starting to blow one more breath when BANG! The balloon shreds into tiny fragments, and she sighs in pleasure. Panting she goes for another balloon, a red 16 inch. “I got to slow down.” She thinks, and stops stroking. Holly takes a few deep breaths and puts 5 lungfuls of air in quick succession into the balloon. She puts her left hand on the side of the balloon, feeling it grow in size as she inflates. Soon it's almost full. Holly desperately wants to keep going and it takes all her self-control to stop and tie the balloon. She has difficulty tying it because she's shaking so much. Holly then takes off her remaining clothes and puts the balloon between her legs, slowly bouncing on it. Holly starts moaning, the tight latex feels so good against her naked body. She immediately grabs another 12 inch balloon. A few days ago blowing a balloon to pop scared her. Now nothing is going stop her from blowing this balloon until it explodes in her face. With fierce determination she bites the neck and blows hard and fast, not slowing until the neck begins to grow. This is Holly's favourite part. She loves blowing it bigger than it's supposed to go and watching the neck grow longer and longer. She blows firmly but slowly, watching the neck start to grow towards her. Once it pushes against her lips, she loses all self-control. Holly drops onto her front, grinding her pussy against the 16-inch balloon. Every time she does, the neck shoots out. She continues blowing as slowly as she can, Holly loves the way the warm latex is forcing its way into her lips. She grips the mouthpiece hard between her teeth and blows hard. The pressure against her mouth gets harder, then there's a loud bang. She pushes harder against the balloon she's riding. Wasting no time she grabs a pink balloon from the pile and starts inflating fast. Holly knows she won't last much longer but is determined to get once last pop in. She desperately blows as fast as she can, the latex growing at unbelievable speed. The balloon underneath her is squeaking loudly. Her pleasure is immense, she closes her eyes, inflating and grinding as fast as she can. Soon she feels pressure on her lips. When she opens her eyes, she sees the pink balloon has reached an enormous size. Easily the biggest 12 inch she has inflated. She feels an orgasm coming and blows hard.

The loud pop sends a thrill through her body making her orgasm. The balloon underneath her pops, and she falls onto her bed. She lays there for a while before finally getting up. Holly looks at the mess on her bed, a wet patch and balloon shards everywhere. Completely worth it though she thinks. She puts the other balloons in a draw and goes to have a shower.